On the 19th of November, 2015, Geekim hosted their second annual hackathon in Tel Aviv and me and my awesome team of five (Eli, Dima, Yorai, and Liat) won first place with our app, FeedMe!

Geekim (which translates to "geeks" in Hebrew) is a private hackathon event for soldiers and alumni of technical Israeli army units, such as the world-renowned 8200 intelligence unit. This year's theme -- reducing "the high cost of living" (Yoker Hamihya in Hebrew). The event took place at Lool Ventures, a startup accelerator's headquarters in Tel Aviv that was happy to provide hacking space and accommodation for the event. About 100 hackers attended, a total of about 25 teams which we competed against. 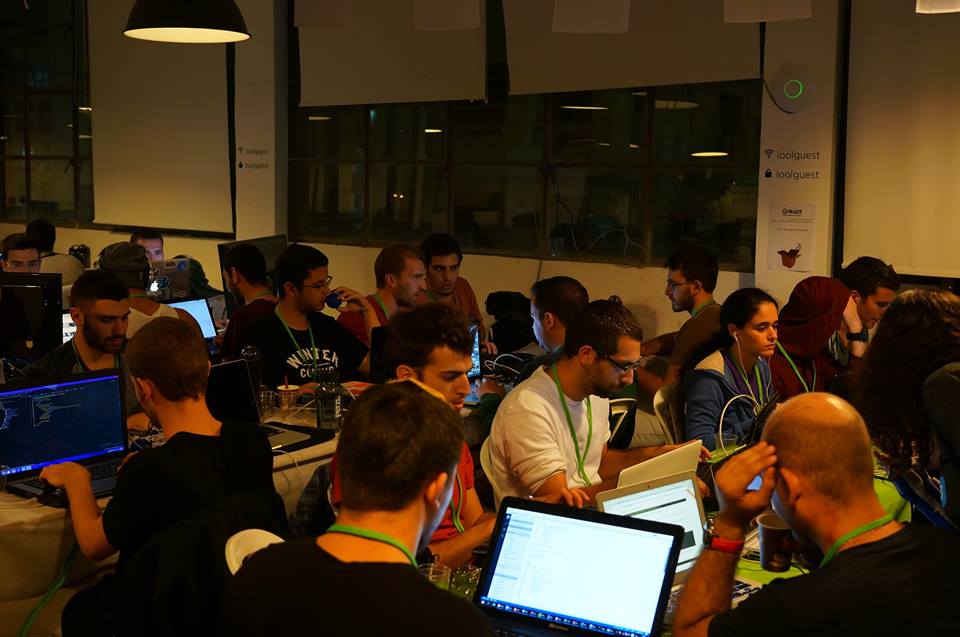 It's important to note that we definitely did not have everything cut out for us when we arrived at the hackathon. Actually, almost all of us didn't even know each other `til we met at the event -- we all planned to find and join a team when we arrived. Nor did we come prepared with an idea that we thought of beforehand. That's right, the idea that won first place was actually conceived in the first few hours of the hackathon, let alone by a group of people who barely knew each other.

Arriving without a team and idea to a hackathon is definitely not "best-practice", to say the least. Winning teams are usually comprised of hackers that have worked together on a product already. They meet up before the hackathon, discuss and agree on an idea, design mock-ups, split up tasks, and decide on the tech stack. However, sometimes that just doesn't work out, and our win just goes to prove that you can definitely win a hackathon if you haven't a team, idea, or both. You may be able to win if you join the right team and come up with an awesome idea. Attending a hackathon alone will also make it possible for you to network and meet other cool, talented individuals that can even help you get the job of your dreams, if that's what you're after.

After we teamed up at the event, we decided to go somewhere quiet to brainstorm and come up with an idea, since the main hacking area was overcrowded and very noisy. We climbed up to the rooftop of Lool Ventures and found a quiet, shady place to brainstorm.

And so we sat together in a circle and brainstormed for a while. We created a list of all of the ideas that popped into our heads, and as we did so, we critiqued each idea respectfully, rating it and comparing it to the others. Once we came up with the idea that we won the hackathon with, we all loved it immediately and could hardly find any flaws in it. We immediately tossed all the the other ideas aside and headed down to the hacking area to start working on the idea that would become "FeedMe".

Every day, thousands of venues throw away high quality food at the end of the day because it has already been prepared but has not been sold. 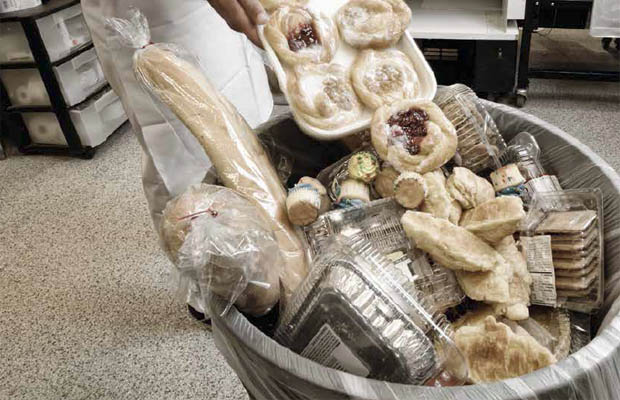 Our app, FeedMe, provides a platform for restaurants, bakeries, and food stands to sell food at a high discount or donate it right before they close, instead of throwing it away while people starve due to poverty. Restaurants prepare food in large amounts which is not always sold (for example, soup or rice which are prepared in huge industrial pots). Bakeries throw away large amounts of unsold baked goods because they wouldn't be as fresh the next day. Supermarkets throw away packaged foods with a bad expiration date instead of selling them for less beforehand. With FeedMe, they'd be able to make some profit on these foods or even donate them, if they're kind enough. 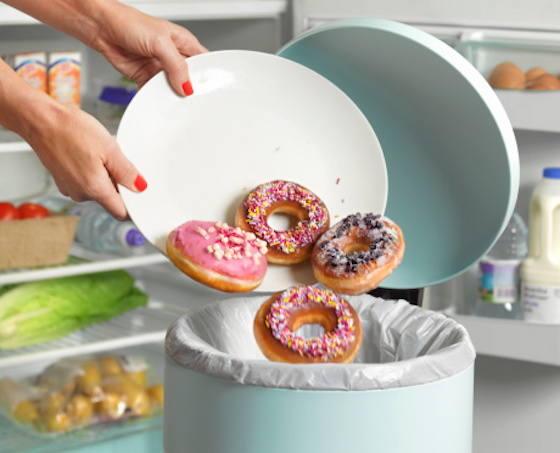 We started hacking away as fast as we could. We chose GitHub as our open source collaboration tool to host our code as we all believe in open source and because GitHub is a great open-source collaboration platform. Based on our shared programming experience, we decided that we should develop the backend in Node.js + MongoDB and the frontend in Angular.js + Angular Material, while deploying to Heroku. 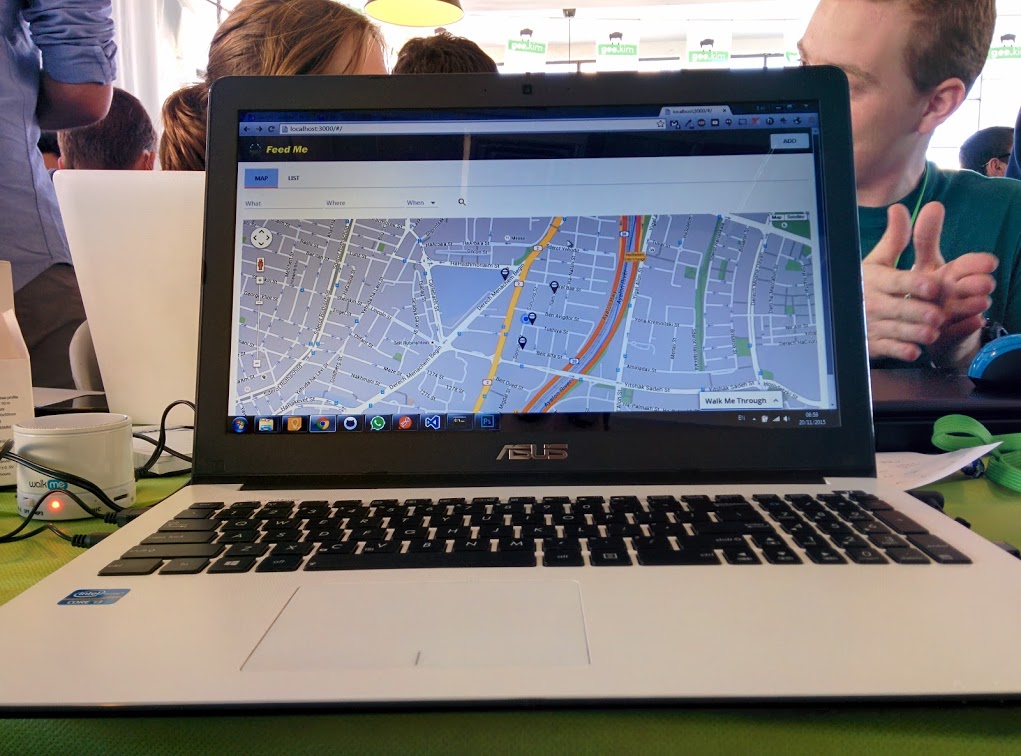 Within a few hours, we had a basic REST API up and running and a functional, fancy client-side GUI. We decided to take a break at around 11:00 PM to stretch our backs, and to try to get a sense of whether our product has any demand or potential. And so we ventured out into the dark night, pepper spray in hand (in case we'd get mugged), to visit some food venues and ask them whether they would use FeedMe to offer discounts / donate their food, instead of throwing it away at the end of the day (we caught some of them in the act). They were all immediately impressed by the idea and said they'd be happy to use it if such a platform existed.

The food was decent -- warn pizza was served for dinner, and mountains of sushi were specially-ordered for the late-night meal. A 24/7 snack table offered baked goods, cookies, black coffee, tea, soft drinks, and energy drinks. Sandwiches were served in the morning, right before presentation. 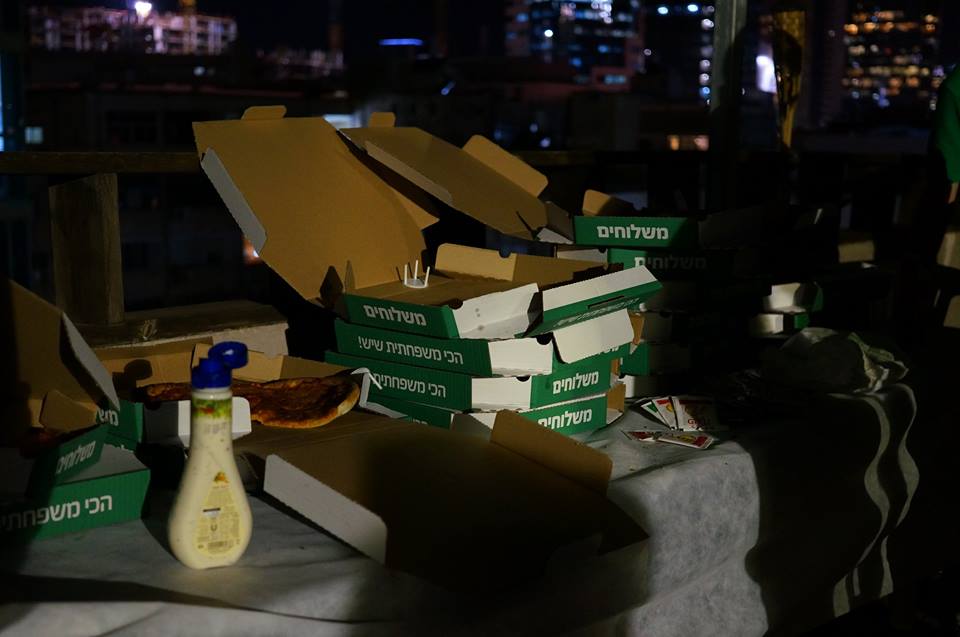 We even found the time to play a few rounds of table soccer! 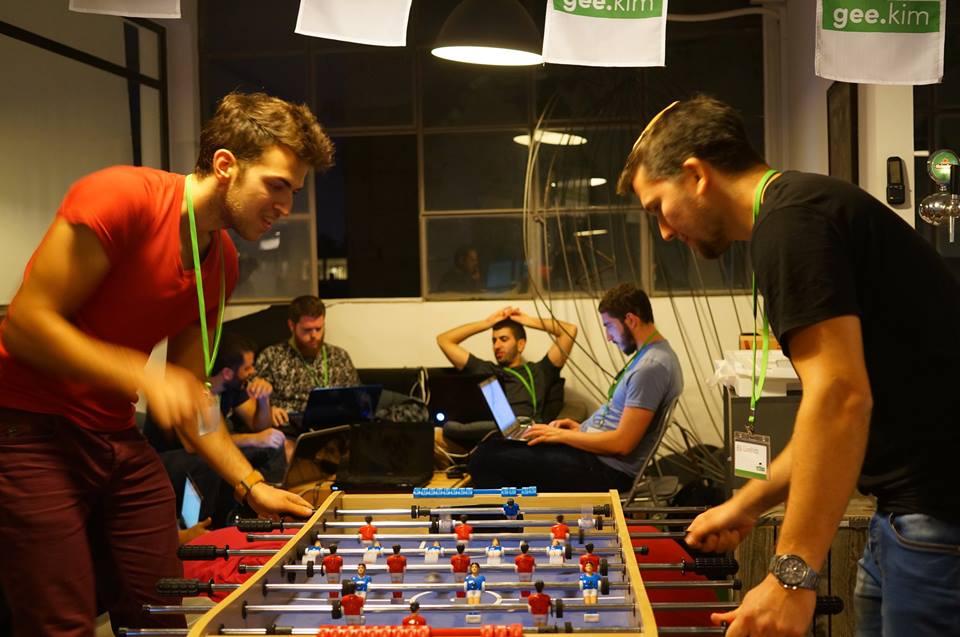 The presentation was split up into 2 stages: semi-finals and finals.

For the semi-final stage, we presented to a small group of judges that walked around from team to team. We intentionally did not prepare a slide presentation, because we were instructed that we should focus on a working and impressive live demo. We talked about the idea, the market research we performed (interviewing the food venues), and finally, presented the app to the judges, explaining its features as we went over the basic flow of finding and navigating to a food venue with a steep discount.

I've mentioned this before in How I Won 2nd Place in Ford's Tel Aviv Hackathon, but it's worth mentioning again. Don't be that group that prepares a five-minute presentation and gets cut off after two. You need to find out, as soon as the hackathon starts, how long your presentation should last. Almost every hackathon limits presentation duration. It's going to be extremely depressing for you and your group when you get cut off and weren't able to get the message across properly, or even demo your app. You'll end up looking stupid and fail miserably. Geekim provided us with 5 minutes to present, more than enough to get the message across.

Make sure to mention the following:

Nothing beats a working live demo of your app. That thing you were supposed to be working on for the past 16+ hours. Showcasing your app and having it work during the presentation flawlessly is extremely important, but even if you fail to get it to work for some reason, explain what you attempted to do with your app.

The hackathon organizers decided that it would be best to announce each group that made it to the finals just as it was time for them to present, to avoid making it possible for people to leave early if they hadn't made it. It was extremely nerve-wrecking to have to wait 20+ minutes to know if we even made it to the finals or not, and since we were the last team to be called to present in the finals, we had to wait the most. 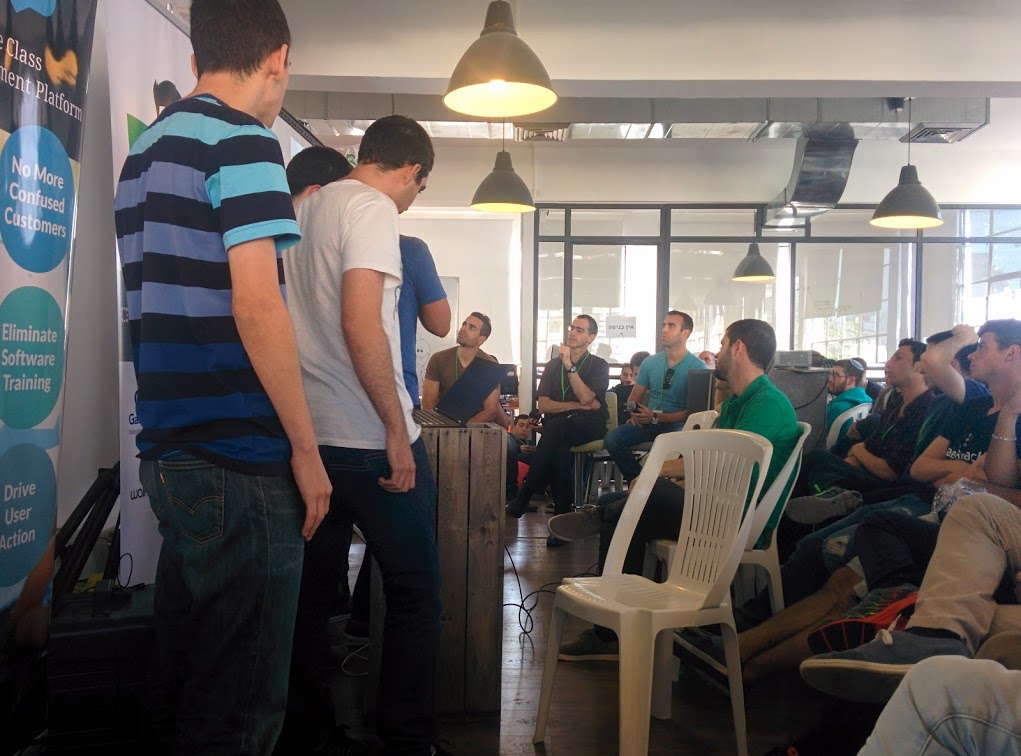 Luckily, we had prepared the laptop beforehand, with the app open and ready. We got up quickly, connected the laptop to the projector, and started presenting. The presentation was pretty much identical to the one in the semi-finals, except this time, we were presenting to the whole hackathon along with more seasoned judges. We immediately noticed that they expressed interest in the idea, and after the presentation, had asked us some questions which we answered flawlessly.

And then came the time to announce the winners of the hackathon. We were extremely surprised to hear our team name called out as the 1st place winners of Geekim! We won a PS4, 5x Xiaomi Yi Sport cameras (similar to GoPro), and 5x VIP Movie tickets. Not bad, but best of all was the overwhelming feeling of winning 1st place in a hackathon with an idea that we conceived and built in less than 24 hours. We couldn't have been happier! 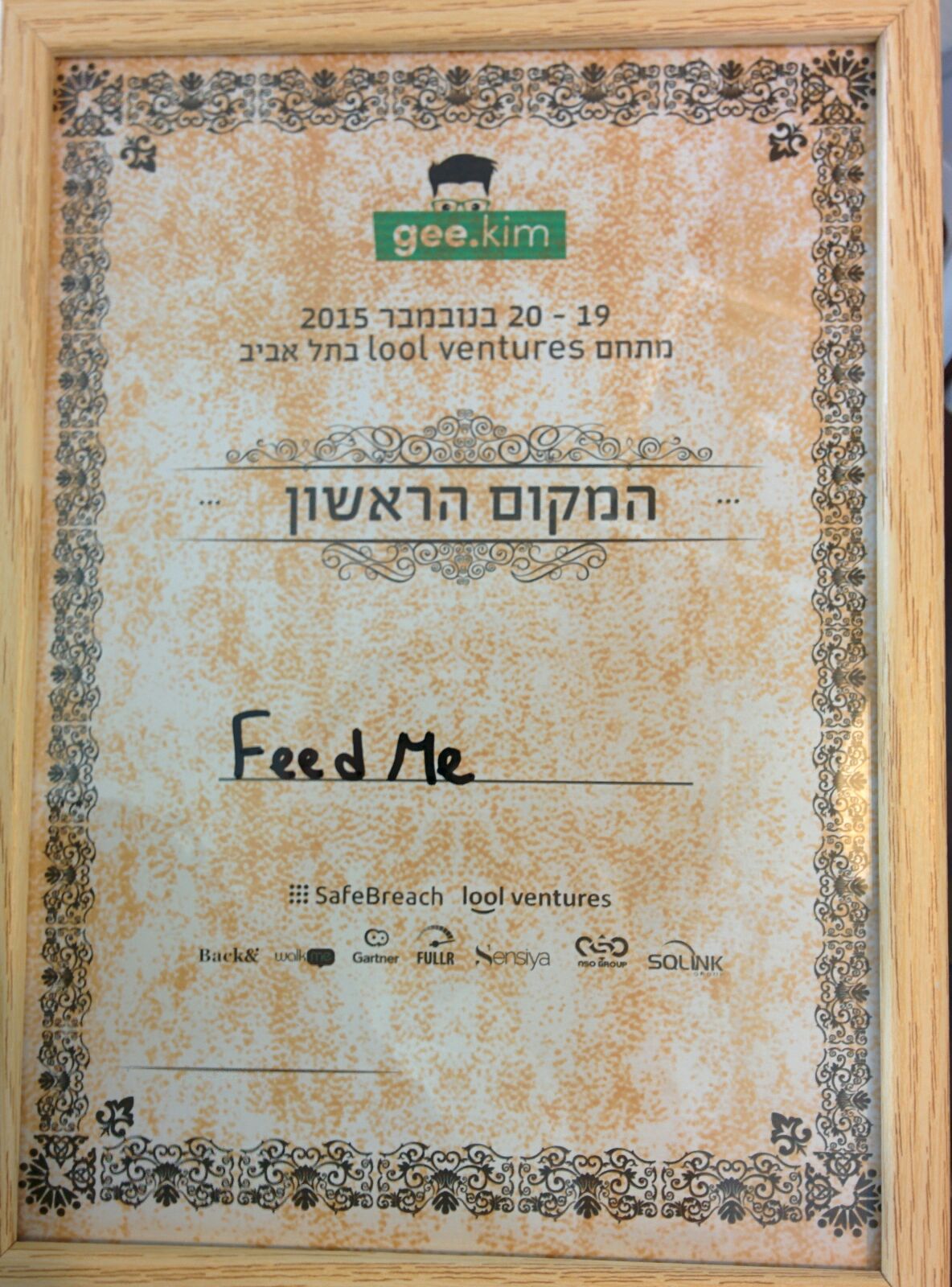